Another cloudy morning, another missed sunrise! Kawaguchiko was under a blanket of cloud when we woke up, so we didn’t head out of K’s house until 6:30am. We drove over to Oishi park, a good base to park and explore that section of shore. We went for a walk but the sky was still looking moody and covering Fuji.

It was still a beautiful morning and was wonderful walking around the lake. As the clouds lifted we drove off to the Maple Tunnel to see if we could get some shots. It was quite empty thanks to the hour and the weather, but Fuji only peaked out for a single moment, before clouds moved over again.

The weather forecast was cloudy for the whole day around Fuji, and so we decided to leave Kawaguchiko and head north to Kofu, the capital of Yamanashi prefecture. Our destination was the Arakawa river and gorge at Shosenkyo, north of Kofu. To get there from Kawaguchiko you get to go underneath the mountain range we climbed the day before! The drive was under an hour, and when we arrived at the tourist spot we were once again lured into a car park but a kind old lady, and paid the standard 500¥. When we pulled up she spoke to me in Japanese, and when I replied she put her hands to her heart and said how glad she was I could speak Japanese!

Shosenkyo Gorge is said to be one of Japan’s most beautiful gorges and is set in one of the most wild areas of central Japan. As part of Chichibu Tama Kai National Park the gorge is in 1,250 square kilometers of forests and mountains. There are even rumours that wolves still live within the park, the only place the remain in all of Japan! We weren’t searching for wolves, but did want a nice wander up the gorge. There is a 4km walking path that goes alongside the river with views of the waterfalls and enormous cliffs. The photos do not do it justice, these boulders were absolutely gigantic, and the cliffs were so precarious!

The gorge walk was surprisingly busy for a random Wednesday in November, although the gorge is popular for autumn colour season. At some spots you can walk right up to the rivers edge and clamber about on the giant boulders, good fun!

At the top of the gorge you can go up a ropeway to get a view of the whole valley area, and on a clear day Mount Fuji too! It started to rain as we got to the top of the gorge, and as it was a cloudy day we decided not to go up, as the view wouldn’t be much good. Instead we were going to search for another set of waterfalls which were the other side of Nosen lake and dam. On the way back to the car we had a look around the shops and found out the area is famous for gems and crystals… and seductive tanuki!

We said goodbye to the nice car park lady and headed off. We first parked at the edge of the dam and had a look around before driving to the waterfall area. When we got there the road had been closed off due to falling rocks, a lot of falling rocks! We were aiming for Oyakodaki, a waterfall hidden off of the side of the road. There was a ~10 minute hike to the waterfall, along possibly the sketchiest cobbled together paths, bridges and walkways ever! The woodland and waterfall were stunning, and worth the mild peril to get there.

It was good fun to get off the usual tourist route again, we met one other photographer at the falls, otherwise we had the place to ourselves. We even got to see a little rainbow on one of the waterfalls, magic!

We stayed in Kofu until around 3pm and decided to head back to Kawaguchiko, just in case the clouds cleared. The drive back was a lot of fun, going down the Wada mountain path, with multiple switchbacks and a stunning viewpoint.

We made it back to Kawaguchiko by 4:30pm, but the clouds had won that day, and Fuji didn’t even peak out at all. So what do you do when you are in Kawaguchiko and Fuji is nowhere to be seen? Visit the supermarket of course! Our trip was rapidly coming to an end, and we needed some omiyage (souvenir) to take home for our family, and ourselves. I absolutely love Japanese supermarkets, it is exciting looking at all the snacks, and spying on the expensive fruit. 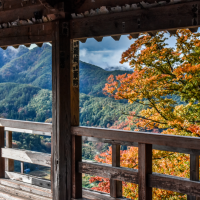