Mount Fuji has developed over millennia, created out of four separate large eruptions, the most recently being 10,000 years ago. A smaller eruption did occur in the 1700’s, the fire and ash being visible all the way in Edo (modern day Tokyo). Mount Fuji is classed as an active volcano, but with a low risk of eruption so is safe to visit and climb.

If you have travelled to the area you may have heard of  Fujigoko- literally Fuji five lakes. The eruptions that created Mount Fuji also carved out the landscape for miles. Once, before Fuji intervened, the largest lake in the world was north of Mount Fuji, covering a vast distance. When Mount Fuji had the last great eruption lava and rocks smothered this lake, diving the once great mass of water in three of the five lakes of Fujigoko (Shoji, Motosu and Sai). Along with the lakes the lava was the bed of what is called the sea of trees- Aokigahara.

You can see that Mount Fuji (centre in red) sits in a caldera encircled by mountain ranges, the lakes visible to above Mount Fuji are the current locations of the five lakes (from left): Motosuko, Shojiko, Saiko, Kawaguchiko and Yamanakako. Imagining that these lakes are were once connected is mind blowing! Each lake has its own charm, iconic view and history. 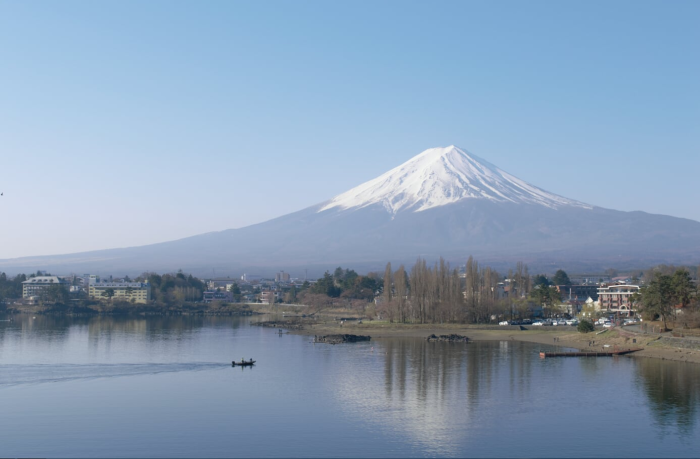 Lake Kawaguchi is the most famous and most visited of all of the five lakes, with easy transport links from Tokyo visitors can get here with little effort. These are the views that you will recognise from tourist websites and postcards etc. The lake offers boat cruises, cable car rides, paddle boats and many hotels, ryokan and onsen. The area is well serviced by bus routes and so tourists can get around to see all the sights nearby. For more about Kawaguchiko.

Yamanakako is the largest of all of the five lakes and the second biggest draw for tourists. Mount Fuji looks rather different from the shores of Yamanakako, the caldera left by more recent eruptions can be seen from this side. Lake Yamanako is home to an enormous swan boat which will give a great tour of the lake. Yamanakako is also serviced by buses from Kawaguchiko. From the biggest to the smallest, Shoji is the littlest of all five lakes. On the shores of Shoji is the edge of the Aokigahara forest, the lava is visible from across the lake as the sea of trees spreads towards the base of Fuji. Here you can indulge in water sports such as windsurfing, but also take it slow and have a day for fishing. Again Shoji is accessible from Kawaguchiko via bus, the trip takes about 40 minutes.

Saiko is larger than Shojiko but much less developed, this may be due to the fact that from many parts of the lake Mount Fuji is not visible, you can see the peak from the West however there are mountains in between still. There are local attractions, such as the bat cave, by Lake Sai. The lake is serviced by the retro bus but also local buses. 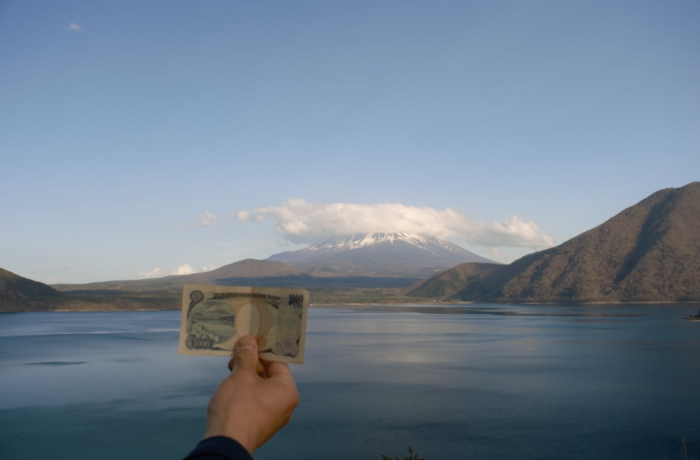 Last, but not least, is the view of Mount Fuji that, arguably, most people have seen, as the view here features on the 1,000Y note (minus the clouds)! Motosuko is one of the least developed lakes, the only activity being the yellow submarine which, mysteriously, is the only motorboat allowed on the lake. There are some good hikes around and also some campsites too. Motosuko is the most difficult lake to visit from Kawaguchiko as there is only one bus which services the lake.

There is a lot to do and see around the Five lakes of Mount Fuji, if you are short for time renting a car is the best way to see as much as possible. If you are having a more leisurely trip, I’d still recommend a car but, you can use the local buses to get around. 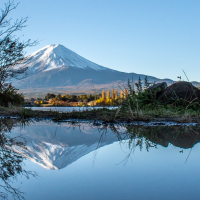