Our second day in Japan saw us waking up early to catch the 7am train to Yamadera in the neighbouring prefecture of Yamagata. The train takes about an hour from Sendai to Yamadera and goes through numerous small villages, and beneath the Japanese alps which reach north to south across the centre of Tohoku. The view out of the train windows was beautiful, as soon as we emerged on the western side of Japan in Yamagata prefecture the leaves went from green to red and orange and mist descended into the valleys.

Yamadera is a temple complex that has been standing for over 1,000 years, 1,000 steps up the side of the mountain. The real name of the temple is Risshakuji temple, but most know it simply as Yamadera, lit. Mountain Temple. We started the hike up the 1,000 steps at around 9am. The only other people on the mountain at that time were older Japanese people who briskly scaled the steps. The walk up is beautiful, stone lanterns and Buddhist statues line the verdant green slopes of the mountain. Every now and then you will find a shrine building, until you reach, in my opinion, the best part of the whole climb, the view from Godaido Hall. Godaido Hall juts out fromm the mountain side and is open on three sides, giving a view of the valley and town, and the mountains across the other side of the river.

My top suggestion for visiting Yamadera is to get there early. By around 11am tour buses will have arrived and streams of tourists begin to ascend which will somewhat reduce the relaxing aspect of the experience. Earlier in the day you can catch quiet moments with nothing but the view.

Once we got back down I wanted to hit up gluten free restaurant number three, but it didn’t open until lunch and we were down too early. The shops which line the street leading to Yamadera station are filled with unique little shops, quite different from the usual Japanese tourist stores. Lots of hand made items and friendly locals will greet you, alongside fresh and reasonably priced fruits and vegetables. The restaurant we visited for lunch was a specialist soba shop, serving juwari soba, noodles made with 100% buckwheat and so naturally gluten free. I ordered the medium platter and was absolutely stuffed!

From the mountains to the coast, we jumped back on the train and returned to Sendai, immediately heading off to Matsushima. The bay of Matsushima is said to be one of the top three views in all of Japan! Matsushima bay is made up of hundreds of small white islands, often topped with pine trees, hence the name matsu (pine) and shima (island). The typhoon which affected us the day before got us again! The sea was very choppy thanks to the impact of the typhoon offshore which meant the cruise boats that take you around the islands were on a reduced course. Usually due to the natural shape of the bay, the water amongst the islands is calm and clear, but on this day it was grey and rough.

Even though it wasn’t ideal conditions the islands were still interesting to see. My favourite part was exploring the islands that were accessible by bridge. The large island named Fukuurajima is accessible across a 252 meter long red bridge, for a small fee. There are a number of walking paths across the island, a small shrine, and a sandy beach with a view.

The only negative point about the area is, like many smaller Japanese tourist spots, that everything seems to close at sunset and unless you are staying at a hotel there is nowhere to eat. It doesn’t take long to be back in Sendai city centre and have plenty of food options though. 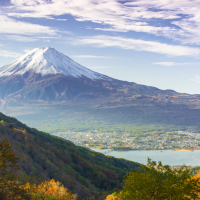